The Ugly One at Soho Rep

I am going to start this post by doing something ever-so-slightly out of character*:  Imma quote someone else’s article. Is that just too gauche? Well, regardless, when I was doing a bit of internet browsing to find good pictures for this post on The Ugly One, which opened February 1st at Soho Rep, I came across this great NY Times article about the show, which had a fantastic quote from director Daniel Aukin. When asked about The Ugly One, he said the following:

“This is not a play you would watch and say, ‘Oh, this should be a movie,’ ” Mr. Aukin said. “He’s playing with so many things that are unique to theater, that aren’t available in other media.”

For those of you who don’t know (who am I kidding…there can’t be many of you who don’t, given that I’m fairly certain the population of my readers is composed entirely of friends), I’ve spent a lot of time in the last 6 months thinking about plays and movies. Individually, as separate entities, sure, but also together. As in, what defines them? What makes each its own unique art form? What does each have to offer the viewer/spectator that the other cannot? Has the sudden prevalence of one (film) in culture made moot the longer standing, and some would say, now archaic and inaccessible existence of the other?

It’s very hard to want to be a writer. It’s also pretty stupid, given the insane challenge that playwrights face, as well as the cuthroat nature of the film industry. And yet, I and a couple dozen other passionate idiots just couldn’t leave well enough alone, and find ourselves knee-deep in the challenges of a 2 year dramatic writing program in the fantastic city of New York. What’s great about this program is that we get to write all the time. What’s terrible about this program is that we have to write all the time. While the program is 3-fold, teaching and refining skills in writing for TV, Film, and Stage, it’s film and theater that most often come into conflict with each other, given, I guess, the inherent similarities between the two. And even as a die-hard theater nerd (till the day that I die, yo!), it’s hard not to see the appeal in film as a medium. For one, there’s its seemingly limitless visual potential and uh, OH YEAH, there’s also the fact that sometimes people give you money to write movie stuff. Or so they tell me. And then you can use that money to do things like pay your rent and buy food. As someone who’s sunk more of her own money into self-made theatrical creations than I’d care to admit, the idea of a writing career in which the writer is PAID reaches the realms of Xanadu-like fantasy.

And let’s face it – film is affordable and accessible in a way that theater simply isn’t. Those who call theater a dying art, while officially and forever my worst enemies, aren’t coming up with this hateful theory out of thin air. Theater’s appeal is…sometimes harder to grasp, let’s say, than that of its sister, Film, or its super cool cousin TV.

And that, my friends, is why when a show like The Ugly One comes along, which, as Mr. Aukin so eloquently describes, so perfectly grasps onto those urgent, fabulous things that make theater theater, I get happy. Just…happy. Happy that plays like this are being produced, and happy that people are paying money to see them. Because those people are in for some of the most delightful treats theater has to offer.

Wit and Follies this was not. (Yeah, I just linked my own posts again. I’m classy like that). Soho Rep has, well…a “rep” in this city for performing on the more cutting edge of the theatrical spectrum. They’re a “leading hub for contemporary theater in New York City….producing some of the most groundbreaking theater…a “hot house” for daring, intrinsically theatrical excellence.” (from their website, if you hadn’t guessed). For those of you who like your theater on the experimental side of things, this is a great place to check out…regularly. (I recall a performance of Sarah Kane’s Blasted there that was the Oscars of disturbing. Is that a coherent analogy? Probably not, but let’s put it this way: it was very, very, VERY disturbing. Like, a dude sucked another dude’s eyes out and then this person ate a baby disturbing….Whoops. Should I have said “spoiler alert”?)

the red "ugly one" is the ugliest one...

Anyway, as far as plays go, Marius von Mayenburg’s The Ugly One is a very simple enterprise. It’s the kind of “story” that can be told in very few words – an “elegant” concept in that regard, almost fable or parable-esque. At the play’s open, the main character Lette discovers that, much to his surprise, he’s crazy ugly. He’s spent most of his life unaware, but when he’s denied the opportunity to present his invention at a conference, his boss is forced to admit to him that it’s his hideous looks that are holding him back. So, he does what any reasonable human being who just found out they’d spent the bulk of their life living in ignorance of their grotesque face would do – he signs up for dangerous, experimental facial reconstructive surgery. And it goes well! He’s super hot now! And yet – here’s the rub – turns out it goes a little too well. He’s so very good looking that men all over start electing to have the (his?) same face put on them, and suddenly he finds himself well, everywhere. And…hilarity, or chaos, or tragedy, (depending on your perspective, I guess), ensues. (Personally, I’d go with a bit of all three.)

It’s a simple enough concept. Done with four fabulously talented actors and one fairly stark set, in a fairly small theater. Period. Done. End of story. And here, my friends, is where the production values end and the theatrical magic begins.

Only in a space that small with a cast that small and a script that straightforward could such magic happen. And magic it was – Alfredo Narciso, who plays Lette, starts and ends the play with the same face. And, oh yeah, it doesn’t change in the middle, either. And yet, here’s what’s SO FREAKING AWESOME about theater (note to self: WHATS SO FREAKING AWESOME ABOUT THEATER = New blog title??) — we bought it. When Lette wraps his face in gauze while the doctor and his assistant, neither of whom actually act out “surgery”, but who rather stand by microphones, commenting as though they were performing surgery while hyper disturbing “surgical sound cues” play, the audience is there. We flinch at the trill of a hacksaw, even though there is no hacksaw to be seen on the stage. And, a scene later, when Lette finally removes the gauze, we sit on the edge of our seats, curious to see his “new face” even though logic insists – correctly – that it looks exactly the same as the face he’d wrapped up a moment before. 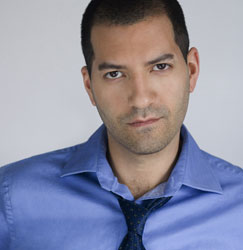 This dude: grotesque monster or the height of attractiveness?

But, because his wife and the doctor were besides themselves with joy, it was handsome. The same way we accepted it as hideous only a scene before when the rest of the actors said as much. Not because we’re idiots (well, OK, can’t speak for everyone in the theater), but because in theater, a good audience is fucking involved. Present. Active participants in their own experience. A good audience will work with the actors, with the playwright, with the director, to create whatever fantasy has been suggested. Such is the ritual of theater, of a bunch of people in a room sharing something with a bunch of other people. Such is its magic. And such is why, for me, theater can never be obsolete.

In a way, The Ugly One was the perfect show for me to see after Wit. To compare the two is to compare fire hydrants to lampshades (don’t ask, just the nouns that came into my head when I got to that part in the sentence), and that’s not my goal. Rather, it was a friendly reminder that even without the budget and the big names and the bright lights of Broadway, magical stuff can happen and is happening in small spaces with groups of people enjoying stories told by other groups of people. And to repeat: it makes me happy.

*Yes, I appreciate the irony of having a blog “character” when I have less than a dozen posts.