PHEDRE at the National Theater 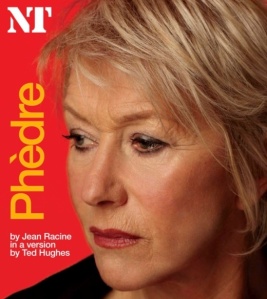 I recently had the great privilege to be in London for a few days, and when I heard that Helen Mirren (excuse me, *Dame* Helen Mirren) would be starring in a production of Phedre (the Ted Hughes translation, no less!) at the National Theater, it was with great hope (and very little expectations) that I attempted to score a ticket. Well, what are the chances that there were TWO returned tickets in the SAME row for the sold-out press night performance available at the box office at the moment my mom and I inquired about availability? Sometimes I think the universe aligns itself with perfect magic.

As I waited for the show to begin, looking at my four-pound program (cost, not weight – they CHARGE for programs in London!! wtf?), a man sat down heavily next to me. “You just got that ticket, didn’t you?” he asked. “Um…yeah,” I said, not quite sure where this was going. “I know,” he replied, “I just returned it an hour ago.” Everything about his tone implied I was RIDICULOUSLY lucky to have gotten his returned ticket, and he considered me a poor substitute for whatever companion of his was originally supposed to have the seat to his right. I would have said something back, but I couldn’t think of the right way to phrase it (“oh, did your wife/boyfriend/daughter/mate get sick or something? well that was just terrific for me, huh?”), and to be honest, he was completely right. I was ridiculously lucky to get a ticket, and I’m sure I’m a completely annoying theater companion to have. When I’m excited about the show, I don’t just watch the performance, I tend to watch the reactions of the people around me (it’s quite creepy, I imagine). I have no scruples “shh”-ing my neighbors if they’re being dicks and talking during the performance (WHO DOES THAT??! sorry…personal pet peeve), I watch a show with what must seem like bizarre focus, and I suspect (although I’ve yet to personally notice), that I’m a Loud Breather.

Anyway, nothing was different in my experience watching The National’s Phedre, which, although strikingly simplistic, offered plenty to observe. At the top of the show the stage was blocked by a “Safety Curtain” (called that even though it was clearly more “wall” than “curtain”). As the house lights dimmed (I still get goosebumps thinking about it), the “curtain” opened like a camera lens to reveal one of the most chillingly enchanting stage pictures that’s ever greeted me at the top of a show. The set, designed by Bob Crowley, is as much of a character in the production as any of the people who inhabit it – depicting a sort of hallway/balcony of Theseus’ castle emerging “naturally” from what must be a huge mass of fiercely orange rock, set against a stunning blue sky. Because this balcony is partially covered by the rock (producing an indoor/outdoor feel), lighting designer Paule Constable was able to work beautifully with shadows. Although one has the impression that Theseus’ kingdom is bathed in bright, hot, golden light, most of the characters spend the play in the decidedly darker (visually and thematically) shadowed world of this balcony.

The Gods, evoked so precisely in Hughes’ translation (they’re both there and not – constantly present in the conscience and consciousness of the characters but never “seen”; and conspicuously absent as Phedre spirals out of control) are both present and absent in this set as well. The sheer majesty of the space is enough to make one believe in the Gods of this world, but the openness and loneliness of the barren set (I can remember one, maybe two insignificant metal chairs) feels as empty and unfulfilled as so many of Racine’s characters when they fruitlessly call on the Gods for help.

If I’m spending a lot of time trying to evoke the visual impact of the stage picture at the top of the show it’s because…well…for me it was by far the best moment. It seems dismal to say it “all went downhill from there” but it kind of did. That’s not to say the show wasn’t stunning – it was – but the task placed on these actors – to fill this incredible space – was near impossible. Which is not, of course, to say that they didn’t do their darndest. It was extremely interesting for me to read the London reviews of Phedre after opening night, and, subsequently, read the New York reviews after a special filmed performance was presented in NYC last week. The Londoners were generally cruel, dissing Mirren as well as the rest of the cast, but placing most of the blame on director Nicholas Hytner (Artistic Director at the National). One reviewer even made the brassy call for Hytner’s resignation as a result of his direction. Mirren’s “restraint” was condemned, and actors were deemed “bloodless”. On the other hand, the NYTimes review of the filmed production had enough ass-kissing gushiness in it to even make me (who love love LOVES Mirren) squirm a bit. Her “majestic theatricality” was practically worshipped, as well as her veteran status and the overall production’s incredible theatrical impact.

Personally, I’m inclined to agree a bit more with the Brits than the New Yorkers. Phedre is one of the most complicated, fascinating and heartbreaking female characters in all of drama, and at times it seemed (to my horror),  like Mirren was encouraging us to laugh along with her at Phedre’s utter feminine ridiculousness. You know all of those horrible stereotypes about jealous women? It felt like Mirren’s Phedre was saying “Yeah guys, that’s me! It’s OK to laugh.” For those of you not familiar with the plot, I’ll give the bare bones version: First performed in 1677, written by the French Dramatist Jean Racine. Phedre’s husband Theseus, the King, has been missing for a while. Meanwhile, she’s desperately in love with her stepson, Hippolytus (awkward…), and doesn’t know what to do about it. She’s tried being a jerk to him (didn’t work), and sending him away (didn’t work), so now, with her husband missing and questions of succession coming up, she tries just telling him how she feels. Now, it’s a tragedy, so can you guess how that strategy works out? Correct – it doesn’t work.

What the New York Times called “majestic theatricality”, I’m inclined to call surface-level mockery, at least at its worst points. At one particularly awful moment, Phedre discovers that Hippolytus is secretly in love with Aricia, a prisoner-of-war living at the palace. First Mirren looks forlornly into the distance, then turns her back on the audience, and a moment later doubles around, literally snarling “Aricia must die!”. Around me, the audience burst into laughter, while I cringed. I’m really awkward about laughter during performances when it doesn’t come at moments where I’m convinced it should (like, say, in a comedy), and this moment, which as written has so much potential for heartbreaking patheticness, became instead a grotesque caricature of every misogynist’s idea of the “jealous woman”.

That’s not to say, of course, that Ms. Mirren is not a spectacular actress. She is. I saw it at several moments throughout the performance, most notably during her death (whoops! gave away the ending. but come on…you had to guess it), which was utterly poignant, painful, and agonizing. Crawling onto the stage, Phedre collapsed in a heap with as little dignity as her servant Oenone, who threw herself off a cliff an act earlier (one British reviewer implied the actress might as well actually have done so. Ouch). Only at this moment (granted, five minutes before the show ended), did I truly feel the impact of the force that is Helen Mirren onstage.

[The rest of the cast was good, too, but let’s face it, any production of Phedre is all about Phedre. A ridiculously petty point that I must nonetheless mention: Dominic Cooper (playing dream-boy Hippolytus) is hot. Like, H-A-W-T hawt. I had seen him a few years back in The History Boys on b-way and was generally unimpressed, but in this incarnation, wearing a black wifebeater and camo pants, he was sizzling. I realize it’s petty to judge someone based on their appearance rather than their performance (um…I think that was good, too…didn’t really notice…) but if you can’t do it with Hyppolytus (the male equivalent of a pin-up girl, as far as I’m concerned), who can you do it with? Let’s put it this way: I TOTES understood where Phedre was coming from.]

Overall, it was a night I would not have missed, and although the performance was curiously disappointing in some ways, the fact of the matter is: reliving the visual impression of that first stage picture still gives me goosebumps. I’d say that’s a good thing…