There’s a fantastic (read as: terrible) story in my family of That Time We Went To See A Production Of Twelve Angry Men. It was a while back – at some point when I was old enough to know how much I loved theater but also young enough to be fabulously emotionally immature (as opposed, of course, to my complete emotional maturity now. yikes.)

We were late. Mad late. As anyone who knows me now knows, this is no big surprise, but I promise you – when it comes to theater, I’ll fight as hard as I can against my natural lazy/late impulses to be on time. Because, if you ask me (and I know you did), there is Absolutely Nothing Worse than being late to a theatrical performance.

In the case of Twelve Angry Men, it was one of those ridiculous, emotionally strung out sequences where, running to the theater, all intellectual parts of myself knew that there is no chance of arriving on time, but something about the act of running couldn’t be stopped – logic was abandoned with the first, I’m-Super-Out-Of-Shape pant, until the running became an anxious expression all its own.

We didn’t make it. Sweaty and panting, we arrived at the theater a solid 10 unforgivable minutes into the start of the performance. Frustrated but not beaten, my parents prepared to allow an usher to lead us in. Which, in turn, ushered in the Jessie-Is-Way-Too-Old-To-Have-A-Temper-Tantrum-But-Is-Having-One-Anyway-Just-Go-With-It-Oh-Wait-Don’t-Because-This-Is-A-Preteen-Yes-Preteen-Literally-Having-A-Meltdown-In-The-Lobby-Of-A-Theater. To me, it was inconceivable to enter the theater 10 minutes late. I actually began sobbing at the thought. As far as I’m concerned, it puts me square in the ranks of those jerk theater goers I love to bitch about.  I imagined the shocked, judgmental looks of the hacks who were, at the very least, able to arrive at the show on time; the inconvenient grunts as people shifted resentfully. As my nightmare took over, I saw the actors, on the stage, stopping their performance to boo and jeer at the fools who didn’t even have enough of a modicum of respect to arrive at the scheduled performance time.

Was it rational? Hells to the no. But is it a glimpse into the way my anxiety-ridden, easily guilted brain works? For sure. It was a learning experience for my parents, too — from this point on, they understood my irrational psychosis re: getting to shows on time. It led to a few panicked moments where my mother, stuck in traffic somewhere, recklessly pulled over so that I could jump out of a car and sprint the last couple blocks to a theater.

(**Idea for new exercise program: Constantly be late for shows. Literally the only running I ever do. Might have a permanent damaging effect on my nerves, though)

So, if you take anything from the last 416 words, let it be this: I fucking HATE being late to shows.

As anyone who’s ever lived in New York City knows, subways are fun things on the weekends. On the weekdays, the pressure of thousands (millions? no idea) of commuters tends to force at least a baseline of reliability, but on the weekends all bets are off. No disrespect to the hardworking folks at the MTA, who I’m sure get a lot of good construction done on the weekends, but sometimes it seems like they wait for Saturday and Sunday to just have fun fucking with people. Oh, you wanted to go to Williamsburg? Sorry, the L’s not running. At all. Did we not tell you that? Yeah…also, we’re gonna cut some other trains while we’re at it. Hey people who live in the outer boroughs! Someone told us that you guys like to get into Manhattan sometimes, too!?! Sorry, didn’t even occur to us…

If you’re a smart and dedicated reader, you’re probably starting to get a sense of where this is all going. Somehow, the lack of reliability on weekend NYC subways and my hatred of being late to shows is about to collide, right?!

Last Saturday, I think my brain checked out for a few hours, because I wound up leaving myself a woefully inadequate amount of time to get from Wall Street to midtown for Roundabout’s performance of Look Back In Anger. Let’s call it temporary insanity. All I know is I found myself waiting for the 1 to arrive when the countdown clock (again, I assume just to enjoy toying with me), suddenly displayed the word DELAY instead of a number of minutes before the next train arrived.

Not to overdramatize, but…hang on! It’s my blog. And I’m dramatic! I will most definitely be overdramatizing! It was as though my heart dropped out of its chest sack. (“Chest sack”, that’s a thing, right? Listen. I never said I was in medical school). If anything can send me into an unearned, unnecessary mental spiral, it is something like that. When the (packed) train finally did arrive, and I mentally calculated how fast I was going to have to run from the 42nd street subway station, the shakes, and (god, I’m embarrassing), the tears started, too. It’s just SO. Damn. Disrespectful. To Be Late! And to make matters worse, yours truly had bought the tickets for someone who was waiting at the box office, who, without my ID, couldn’t even pick up the tickets for himself. Not only did my theater-going experience hang in the balance, but so did the theater going experience of an additional innocent. The stakes, my friends, could not have been higher.

Spoiler alert: I’m writing the blog entry about the show. I made it. After 5 blocks of terrible, I-really-should-start-an-actual-exercise-routine-and-not-count-simply-on-being-late-to-shows-once-a-month running, I showed up at the box office and was treated to no more than a few admonishing looks from ushers (although, that might have been the visual shock my pasty, sweaty, panting body, not the late-ness). Seats were taken just a few minutes before curtain, and BOY, WAS I IN THE MENTAL SPACE TO ENJOY A SHOW!

That’s a lie. The actual point of everything I’ve written thus far was that, when I showed up to Look Back In Anger last saturday night, I could not have been in LESS of a mood to see a show. I had cold sweats, I was anxious, I was feeling a lot less relief than I should have (and mostly just residual anxiety) about “just making it”, and of course, I was having flashbacks to an inappropriately-aged preteen crying in the lobby of Twelve Angry Men. One of my best moments.

There’s a point in here, somewhere, and it’s this: it was going to take a hell of a lot for me to be engaged with a show at that point.

So the fact that I now tell you that Look Back in Anger was, by far, one of the greatest productions I’ve seen in recent memory, should mean something.

Within minutes, all thoughts of theater-going lateness were forgotten. I was completely absorbed in what was a fucking fantastic production of John Osborne’s 1956 play. Good on you, Roundabout.

Look Back In Anger is one of those plays I’d heard of – I knew Osborne was British, part of the Angry Young Men crew – but never studied or focused on in any major way. It’s a play that most theater folks are aware of, at least peripherally, as being Important and Significant, if not slightly, well, forgettable.

The play is a relationship story, written by a postwar generation that was feeling slightly disillusioned with the state of the world after WWII. Allison and Jimmy are married, but Jimmy’s angsty frustration with his lot in life and Allison’s impassiveness in the face of it make for troubled times between the two. It’s aggravated by the presence of Cliff, a friend of Jimmy’s who Allison enjoys cuddling with and kissing in front of her husband (yeah…). When Allison’s friend Helena shows up, who Jimmy just happens to hate, things get cray-cray. Couples are scrambled up and remade. Angst is angst-ed about. Passion, frustration, boredom and apathy all sort of converge in one emotion filled, shitty apartment just like hundreds of thousands of similar shitty apartments in England in 1956. Or, perhaps, in New York City in 2012. 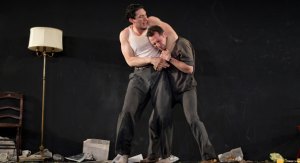 It would not be an understatement to say that nearly everything about this play felt like it was speaking directly to “me”, to “my generation”. I think the play’s strength is that I would not be alone in feeling that way — most likely the older members of the audience got a lot out of it, too. But director Sam Gold’s production felt like it was keying in perfectly to something essential in the frustration that, well, all young people, and especially young people inhabiting troubling peripherally “unstable” times feel. This play takes a very, very personal story – there is nothing more personal than a 4 person relationship drama – but uses it to key into an essential, universal frustration of an entire generation…and, subsequently, a generation decades after it. 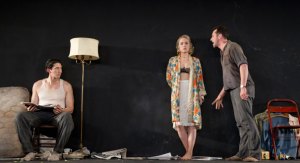 It must have been thrilling, in the 50s, to go to the theatre and see a play that you felt was speaking directly to you. To hear a playwright, actors, a director, saying “yeah, we get it. Life feels long and boring and purposeless sometimes and you feel immeasurably frustrated to have been born in a generation so close to so much but so passively far from everything.” It must have felt a lot like I felt, last Saturday night, when I went to Roundabout Theater Co’s production of this play, and realized that over 50 years ago John Osborne so perfectly captured such a compelling moment in time that, it turns out, would be hyper relevant so many years down the line.

And oh yeah — the freaking actors freaking killed it. (You can tell when I’m getting passionate about something, by the way, because of how liberally I’ll begin to use the words “freaking” and “fucking”). I don’t flatter myself to assume anyone of importance is reading this blog, but regardless, just for kicks, maybe, I have to give a massive shout out to Adam Driver, Charlotte Parry, Sarah Goldberg, and Matthew Rhys, who made up this phenomenal cast. Sometimes I see a play and I think “well, the person who wrote it was smart, and the director seems smart, and those actors…uhm. are pretty? and good at memorizing lines?” And sometimes, the best times, I see a play and think “Those actors fucking get it.” Like, the way the chicks in this tumblr fucking get it (I love that tumblr). These actors, in case you were wondering, FUCKING GET IT. 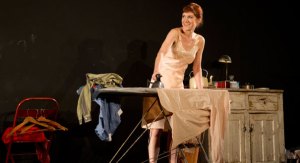 I have to end this blog on a sad note. Here’s why theater in New York is gut wrenching. I saw what I think is one of the greatest productions in this city of 2012 (IMHO), a production so good, it was able to pull me out of my Late Arrival Mental Breakdown….and the house wasn’t even full. Wasn’t even CLOSE to full. And the average age of the audience was probs like…68. Or 69. I mean, god bless old people, because they freaking GO to theater, but young people! Where are you!? Roundabout, especially, works hard as hell to make their stuff accessible – witness hiptix, their $20 ticket program for people under 30. THEY COULD NOT MAKE THIS ANY EASIER FOR US. Please, if you are reading this, and you are even the slightest bit interested, GO SEE LOOK BACK IN ANGER. It’s awesome. It’s everything that theater should be: present, compelling, provocative, urgent, beautiful and exciting. You literally could ask for nothing more.