I hesitated a lot before writing this review. Normally, as you may have noticed, I like to start my posts with some sort of super long and rambly anecdote that is supposed to transport you, reader, on a fascinating but seemingly unrelated literary journey before, with miraculous seamlessness, tying in beautifully to my ultimate point about whatever play I am “reviewing”. (Truth in advertising: I said “supposed to” — I realize that it inevitably goes on way too long and probably doesn’t connect at all as perfectly as I would hope).

However, I had a hard time determining my “ultimate point” with regards to Signature Theatre Company’s revival of Blood Knot, currently in production at their beautiful new theatre complex on west 42nd street, and directed by the esteemed playwright.

I’m not sure exactly what it was about this production that left me so ambivalent. Perhaps it was the subject matter – like all of Mr. Fugard’s plays, Blood Knot (his first) focuses on racial tension and divisions in apartheid stricken South Africa. Not a subject matter I have any personal familiarity with, and one, given its damaging social and political impact and extensive history, that seems to demand tremendous sensitivity from any dumb American (like mineself) who would dare “critique” a work of art about it on any serious level.

I’ll admit that I “checked in” with my “pals” over at the NY Times before formulating this blog post. (And by “checked in” I mean, visited the nytimes website, and by “pals” I mean I went to the same school as Ben Brantley, and once I watched a lecture that he delivered wherein he waxed poetic about the terrible, doomed future of American theater — so we’re basically best friends.) According to this well reasoned review from Charles Isherwood, the acting performances don’t quite do justice to the play’s intricate construction, and fail to create the emotional impact otherwise accessible from this play. As in, this production of Blood Knot didn’t make him feel as devastated as he knew the play is capable of. 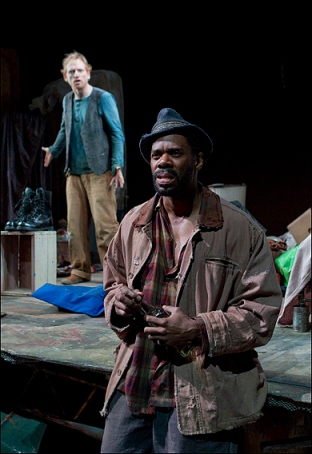 Unlike Mr. Isherwood, I was unfamiliar with the play before seeing it at Signature, so I had no ideal standard with which to compare it. Instead, the performances of actors Coleman Domingo and Scott Shepherd were to be my first introduction to Blood Knot. A few of my peers, with whom I saw the production, unknowingly echoed Mr. Isherwood’s opinion – they too felt unmoved by the play’s end. The play tells the story of Morris and Zachariah, grown men who share a mother but, since they have different fathers, have very different skin tones, a distinction that made every social difference in South Africa when the play was written in 1961. Although Morris can pass for white (“is” white?), he lives with his brother after spending several years away, caring for him, potentially out of some sort of filial guilt. Like all of Athol Fugard’s plays, Blood Knot is a super slow build, with a first act that has often been criticized as “action-less” and overly expositiony. But, like all of Fugard’s plays, the end is an explosion of emotion, ideally one that has been painstakingly earned over the course of the previous 100 minutes.

A ludicrously simplified cliff’s notes version of Blood Knot‘s “explosive ending” would be thus: the two brothers come to realize that incredible social striations of their society are, perhaps, more deeply ingrained than any fraternal love they share. The catalyst for this emotional journey is Zach’s pen pal relationship, started via a newspaper advertisement, with a woman who turns out to be white, and the tension between the brothers when they make this realization. (As a black man, for Zach to be communicating with a white women in such a way poses a great risk). Although this threat is eventually resolved, the issues and anxiety it raises in the brothers winds up taking over. 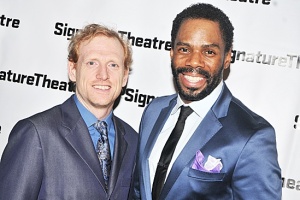 it's cool guys - see! they're pals in real life

I’ll hand it to Mr. Fugard, who directed the production (and PS — can we talk about how freaking badass it is for a playwright to direct his own production? And at age 79??) — the staging is awesome. The play is staged in Zach’s shack of a home, which is situated on a raised platform and filled with old furniture and random props. Zach and Morris spend most of the play on this platform, “inside”, sleeping, cooking, and going about their routines. However, a sort of “play” is established when, in an attempt to troubleshoot the problem with Zach’s penpal, they explore the idea of Morris posing as Zach and meeting her – as a white man, the social danger would be mitigated for Morris. To explore this plan, they have Morris “practice” acting like a white man, interacting with Zach not as his brother but as a socially recognized superior race. (For those of you cringing while reading this – yup, it was massively cringe-worthy). Eventually, the “game” takes over, and Zach, on some masochistic or perhaps combative impulse, encourages Morris to really practice. Inspired, he begins pitching the contents of his home off the platform – first, he throws kitchen supplies, then knick knacks, household items, and suddenly he’s knocking the furniture and walls right off. They crash to the stage floor, loud as hell, while Zach smiles maniacally, leaving a bare platform for Morris to practice being a bastard on.

It’s a super theatrical moment, entirely unexpected in what has previously been a super realistic play, and it’s impact was extraordinary: terrifying, exhilarating, and left me breathless with frightened anticipation. It’s moments like these, (like ones that I’ve lauded in other performances) that make theater so fucking awesome. It took so little – just seconds of clearing a platform – for the two actors to completely subvert the world they’d created. In the best way.

That was by far my favorite moment of Blood Knot. Looking back, I, like Isherwood and my fellow audience members, must admit that I’m not sure the play’s climax reached the emotional level established by such an incredible physical set up. After that moment, I was legitimately afraid that one of the men was going to kill the other. Spoiler alert: they don’t – but I think the text would suggest that the place the brothers get to is just as devastating. So why did I, like Isherwood, not quite feel that? Perhaps, as some of my peers suggested, it had to do with the characterizations – both Morris and Zach read as caricatures at times, more concerned with mugging to the audience or being comical than hitting emotional levels. But that might be an unfair, surface level critique. I will admit, though, that even after 2 and a half hours, I didn’t feel like I knew either of these men on a fundamental, deep level that one can often get to with characters in a really kick ass play. In fact, there was a lot I didn’t know – and wanted to – about their history; obviously, this is meant to be one of the plays biggest, and most slowly revealed, mysteries, but I guess the reveal didn’t give me enough, in the end. Whether this is the fault of the text or the performance I don’t know, having never seen another production of Blood Knot. All I can say is I would probably commit a capital crime for the opportunity to have seen Blood Knot when it first premiered, starring Fugard as Morris and Zakes Mokae, a crazy-badass South African actor who has killed it in basically every Fugard play since, as Zach. Or, the Off-Broadway premiere in 1964, starring JD Cannon as Morris and James Earl Jones as Zach.

A quick word on Signature, for those of you unfamiliar: they recently finished constructing the previously mentioned theatrical complex on W 42nd street, and it is GORGEOUS. Three theaters, a big bar/cafe, and massive bathrooms, which is worth mentioning for anyone who has ever waited on line to use the bathroom in a theater. (Read as: any woman who’s ever been to the theater). I heard, too, that they designed the theaters so that the actors are forced to exit through the lobby — nothing like forced socialization! — but it means that you often see directors, playwrights, and actors mingling in the common space as the shows get out. I’m not lying, people: this space is like a theater-lovers wet dream. It is VERY MUCH worth seeing a show here just to experience the space. Right now they’re performing Blood Knot, my previously reviewed Lady From Dubuque, and Katori Hall’s Hurt Village.

Interestingly, Signature Theatre Company is known for producing American works – Blood Knot is their first production by a non-American playwright (stole that tidbit from Isherwood’s article – thanks Ish! See, I can call him that because we’re best friends. Just kidding….Please don’t sue me, Ish. I mean, Mr. Isherwood). Anyway, Blood Knot is definitely an interesting pick, especially for their inaugural season.

But you know what? I’m also not complaining.