Follies at the Marquis Theater (Broadway)

even the poster is crazy-beautiful

Alright, get ready to sweep the floor around you, because I’m about to drop some names:

If these names mean nothing to you: don’t worry about it. You’re at home on your computer reading a blog: you got no one to impress.

If these names mean something to you and you’re aware that they’ve all congregated in the Broadway revival of Follies, then uhm, yeah…it was everything you’d imagine.

If these names mean something to you but you’re somehow, incredibly, bizarrely, under-a-rock-ly unaware of the show they currently all have in common, then RUN, don’t walk, (or perhaps, fly…) to L.A., where the revival is moving right about now.

Continuing in my trend of reviewing theater productions that are really, ridiculously close to closing/have already closed, JUST to ensure that if anyone is ACTUALLY reading this and ACTUALLY decides to see one of these shows, they can’t…let’s go with Follies, which closed in NYC on Jan 22nd. The show is a Sondheim classic, with dozens of fantastic parts for “mature” actresses, and this production, which features the talents of the list above along with another whole horde of crazy-talented folks, was pretty much guaranteed to succeed from the day Bernadette signed on the dotted line. (http://folliesbroadway.com/company/cast) Add to that one gorgeous design and crowd-pleasing choreography and you’ve got yourself a hit…ironic if you know anything about the plot.

…cue me talking about the plot! (TRANSITIONS, people…that’s how you do it). Follies is set in a crumbling theater, just about to be closed after a long and successful life, in good ol’ 1971. The theater’s owner is throwing one last party, to which he has invited a host of former performers – Follies Girls, as it were – to celebrate Times That Once Were and all sorts of other good, nostalgia-inducing things guaranteed to make for drama. Among the guests are Sally and Buddy and Phyllis and Ben, two couples/former friends who…you guessed it, spend the evening bemoaning Pairings That Might Have Been or, alternately, glaring at each other with venomous jealousy over Pairings That Might Have Been. Basically, it’s a recipe for drama both quiet and loud, regrets and lost hopes, and something of a meditation on the public vs. private and real vs. performance. Throw in a few showstopping songs and you have everything that a night on Broadway should be – beautiful, sad, powerful, and epic. And on a Broadway Budget, no less. 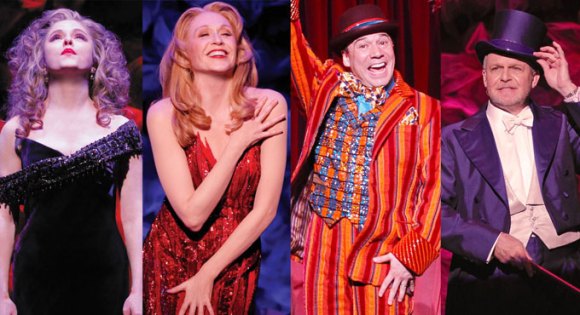 The most insane (ly awesome) moment in the show is, without a doubt, during an epic Sally/Buddy/Phyllis/Ben fight, where not only do the four begin yelling over each other, their Past Selves (also characters in the musical, used to great effect) join the fray as well. They step downstage, and a curtain lowers discreetly behind them. As the fight reaches a climax – and the shouting becomes almost inaudible in its chaos – the curtain tumbles, revealing the old stage, which had appeared as merely a musky old theater, to be completely transformed into the height of spectacle – layers of bright, gauzey flats dominate, and dozens of performers, dressed in showy regalia, begin singing of their show, the former Follies show – Loveland – to the bemusement of the lovers. The characters’ anguish is quickly overpowered by performative fluff, leaving them – and us in the audience – in a state of stilted confusion.

Now, here’s the thing about me: I’m kinda easily embarrassed by overly flowery shows of … well, anything: romance, spectacle, melodrama, etc. Everytime I’m witness to a public proposal I tend to cringe, and not out of adoration (good god: the jumbotrons at sporting events?!) When I was a little kid and was given a piece of clothing with a bow on it I pretty much threw a temper tantrum (and at the very least, immediately pulled the offensive bow off). Once, a very long time ago, a wonderful boy wrote me a love poem and instead of being flattered and feeling ooey gooey, I, like a big fat jerk, pretty much buried it under a rock and hoped it would disappear without a trace. In fact, my stomach is cramping in embarrassment just thinking about it now. People who sing love songs to their partners are, to me, some of the scariest mo-fos alive. There are many reasons why watching The Bachelor/The Bachelorette makes me want to kill myself, but the public displays of Relationship therein are certainly among them. (The private concerts? The fireworks? The inevitable Expensive Car Date where a confused crowd gathers to watch Love being found in a Rolls Royce parked awkwardly in front of a fountain or some bullshit?!!)

How does this relate to Follies? Well, the “show-within-a-show” that dominates the 2nd act of the play is essentially the physical embodiment of everything I just expressed feeling great embarrassment for. It’s a RIDICULOUS freaking show-within-a-show. Fucking Liberace would have been embarrassed. Like, I know it was written decades ago, and I know it was fictional, but would anyone in their right mind really go see a show called Loveland??? Loveland, people. It sounds like one of those Tunnel Of Love Carnival rides with midgets in diapers pretending to be cupids. To repeat: I’d rather kill myself.

So even though it was entirely fictional, and even though the rest of the show was beautiful and much simpler and quite stunning, I still found myself squirming uncomfortably during this one, the show-within-a-show with the Title That Must Not Be Named. Now God knows I love glitter, but there was a lot of it. And God knows I love feathers, but there was a lot of that, too. And God knows I love pink, but it was an excess of pink. And GOD KNOWS I love super hot men in tights wearing old fashioned sparkly British Dowager hats, but…man. was it. a lot. Not to mention the fact that the song, “Loveland”, that introduces the sequence is populated by characters named First, Second, Third, and Fourth Cavalier, and features such marvelous lyrics as:

and a chorus of

Just in case you don’t have the full visual yet, it looked like this: 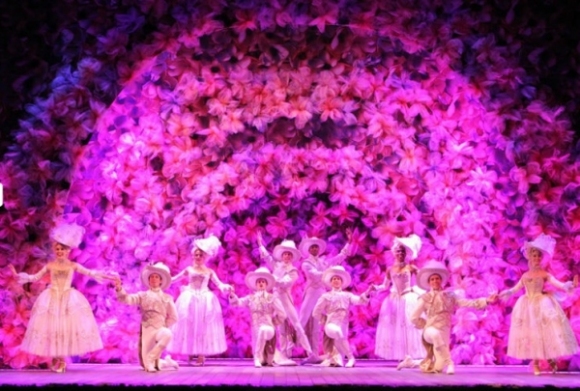 lots. of things. are happening. here.

I won’t lie: I had a Moment. Generally, at such moments, I immediately panic, look for a bridge to throw myself off of or some cashews to ingest (nut allergy, for those of you who don’t get the reference), then think of whatever poor schmo I am seeing the show with, and wonder in fear whether he/she is also embarrassed, and then start feeling doubly embarrassed at the fear that he or she is also feeling embarrassed, and then…well, you get it. It’s a vicious cycle.

Fortunately, in my case, my date for the evening was a solidly good sport, and, as far as I’m aware, solidly loving the spectacle. And, as I looked around the audience, (or, alternately, listened to the coos of the gentlemen behind me, who were Seriously Loving It), I realized that no one in the theater seemed to give as much of a crap as I did about the ridiculousness. The pomp. The circumstance. Things that could be described as “dandy” and “gay”.

And of course, the ridiculousness is the whole point – it’s about the juxtaposition of over-the-top spectacle and imposed performance on the genuine emotion of the performers/former performers. The lyrics to “Loveland” are supposed to ring hollow – I mean, come on, Sondheim is the guy who brought us Sweeney Todd, for shit’s sake. He’s not likely to approve of a man in snow white tights singing about a “sunny honeymoon” where “seven hundred days hath June” (woah, just threw up in my mouth a little there), unless used for dramatic/ironic impact. And in fact, a few songs later, when Bernadette brought the house down with “Losing My Mind” and the stupendous Jan Maxwell killed it with “The Story of Lucy and Jessie”, I realized that fucking killer talent can always trump ridiculous 70s kitsch. And even a cynical bastard like me can’t help but be dazzled by so many sequins. (Nauseated, yes, but also dazzled through my nausea).

Never kitschy and embarrassing, of course, is the cast, who smile through their cray-cray costumes and destroy with their performances. Danny Burstein, for one, gets a special shout out from me for being the absolute master of Angry Outbursts. (Back in the good ol’ days, I considered myself something of a veteran at Angry Acting Outbursts, so I have a particular soft spot in my heart for performers talented in the like). Overall, the show is seriously a stunner, in every sense of the word, and the cast of Broadway vets ensures that at no point does their incredible talent go unnoticed.

…but still the awkward, perpetually embarrassed freak in me has to wonder, did they have to use SO many pink feathers?

2 thoughts on “Follies at the Marquis Theater (Broadway)”